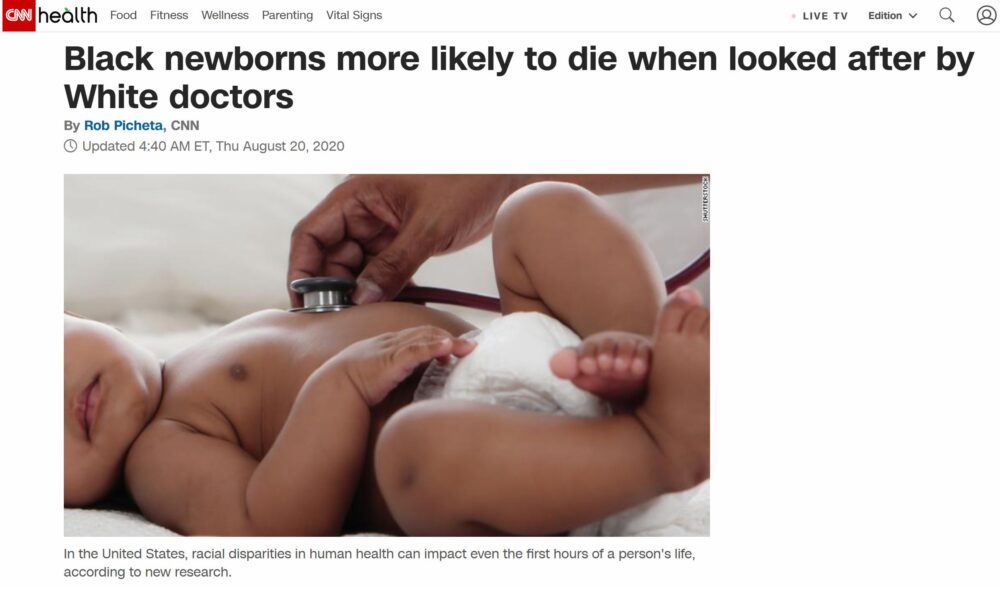 (CNN) Black newborn babies in the United States are more likely to survive childbirth if they are cared for by Black doctors, but three times more likely than White Babies to die when looked after by White doctors, a study has found. The mortality rate of Black newborn babies in hospital shrunk by between 39% and 58% when Black physicians took charge of the birth, according to the research, which laid bare how shocking racial disparities in human health can affect even the first hours of a person’s life. By contrast, the mortality rate for White babies was largely unaffected by the doctor’s race. The findings support previous research, which has shown that, while infant mortality rates have fallen in recent decades, Black children remain significantly more likely to die early than their White counterparts

US infant mortality rates decline, CDC study says, but Black infants still twice as likely to die. Researchers from George Mason University analyzed data capturing 1.8 million hospital births in Florida between 1992 and 2015 for the new study, which was published Monday in the journal Proceedings of the National Academy of Sciences of the United States of America, also known as PNAS. When cared for by White physicians, Black newborn babies were about three times more likely to die in the hospital than White newborns, the researchers found. That disparity dropped significantly when the doctor was Black, although Black newborns nonetheless remained more likely than White newborns to die. “Our study provides the first evidence that the Black-White newborn mortality gap is smaller when Black MDs provide care for Black newborns than when White MDs do, lending support to research examining the importance of racial concordance in addressing health care inequities,” co-author Rachel Hardeman said on Twitter. “Black babies have been dying at disproportionate rates since as long as we’ve collected data. The time is now to change this and to ensure that Black infants are afforded the opportunity to thrive. “It’s already known that Black infants have 2.3 times the infant mortality rate as White infants, according to the US Department of Health and Human Services’ Office of Minority Health.

And a report from the US Centers for Disease Control and Prevention, which covered the period between 2000 to 2017 and was published in June, found that Black infants still have more than twice the risk of dying as White infants. “Strikingly, these effects appear to manifest more strongly in more complicated cases, and when hospitals deliver more Black newborns,” the authors wrote. “The findings suggest that Black physicians outperform their White colleagues when caring for Black newborns.”The authors did not speculate about the reasons behind the trend, but wrote: “Taken with this work, it gives warrant for hospitals and other care organizations to invest in efforts to reduce such biases and explore their connection to institutional racism. “Reducing racial disparities in newborn mortality will also require raising awareness among physicians, nurses, and hospital administrators about the prevalence of racial and ethnic disparities,” the researchers added.